What a difference a day makes. It was (as Lance Armstrong would say) there was no chain on the bike and the whole rig glided along as though on air. Damn, it was chilly this morning without my gilet (am I going on about that a bit?) but by 10 I warmed up until the day got really hot. Lovely! It’s like cycling through warm cotton wool.

This morning was a bit surreal. I’ve resigned myself to being woken by the Dawn chorus, although some of them have sounded like a bunch of drunks on their way home from an all-nighter. But this one was spectacular. I went out for a pee one night and was blown by the night sky, and the birds singing was a bit like that. It had depth and layers and repetition until something new started. So, I just go to bed earlier now knowing they are going to sake me at six.

Today I was heading for Coulon and when I got to coulogn I just thought I’d read it wring. I was a bit fed up because I’d only done 45 miles and it seemed I was supposed to stay in this dump. Quicy changes when I realised my mistake and pedalled on withe hot sun at my side and the, by now, strong northeasterly at my back for another 20 miles.

Colon is full of Brits. I’m in a bar and there are three families around me. I made the mistake of asking for a grand bierre that they kindly served in a tankard. So much formmy anonymity!

I’ve run out of gas! Who told me you can buy screw top canisters everywhere? My ‘girlfriend’ in Mllets who sold menthe Pocket Rocket, that’s who.

AnywAy gentle readers, Santander is almost 400 miles nearer than when I set out so I must be doing something right

How about this for roadkill?

Not much to report today other than bow lazy I’ve been. Got up, had breakfast, had a long hot shower, felt exhausted and went back to bed. That shower didn’t have one of those really annoying push button thingies that I always mean to make some sort of clamp for, Market, and make my belated fortune from the same people who all bought travelling bath plugs.

Eventually walked to St Malo sur Bois and bought lunch in the only shop that was open. Resolved to go further afield this afternoon, but in the meantime felt a little nap coming on. Cycled this time to St Laurent sur Sevre along beautiful paths that go from the campsite, along the banks of the Sevre and found one more shop that sold me a cheap padlock. Still, better than nothing.

I am siting on the veranda of a kittle lodge on the campsite – did I mention I’ve not seen another camper, all very spooky – basking in the evening sun and about to go for a few beers. In the bar they have a dog that has the colouring of a Bengal tiger! Good beer as well.

He’s is a picture of my path to the supermarket. Bit of a contrast to yesterday.

That was a tough one. I’m not going to go on about it but I knew something was a bit odd when it started to rain at breakfast. Still, I’m used to that so set off and had a great 40 miles to the Loire. There was a real change in the countryside: gone were the lovely lanes of Brittany and instead there were rolling open wheat fields for as far as the eye can see. It also got busier and a bit less relaxed. Cyclists don’t wave any more and the traffic became a bit stressful. So anyway, I laboured on, got lost a few times and eventually found this beautiful campsite in Poupet after 72 hot miles.

I had some equipment failures as well. Actually I have been losing equipment including my old and much favoured gilet. The worse part was that all my keys were in it. Losing the top off my pump seemed minor but could have been catastrophic.

Im hoping for a better day tomorrow but if it rains I’m going to take the day off. Phew. Say nice things people. That has been tough. 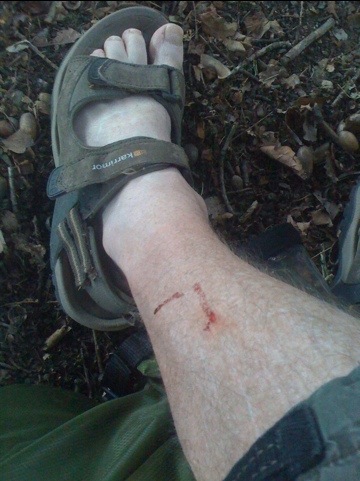 Made it Nort sur Edre it is and another beautiful campsite that has charged me nine euros. Last night was only three euros, but this one has Mosquitos. I’d forgotten about those little buggers but happily not about the DEET and my plastic melting powers are at their peak.

And it’s getting ‘otter (where’s my Tarka joke when I need it?). That’s it now, even the gilet came off today and I have this constant struggle to find water. I’ve been practising ‘give me water or I will die’ in my best O level French but have not had to use it so far.

Today is Sunday meaning that the usually sleepy French countryside was even quieter. I went through towns and villages calling out ‘ello but I guess they’re all in church or something. In bed if they have any sense and not pedalling 23 miles on a completely straight road. Those Romans have a lot to answer for!

So tomorrow I pass a big milestone and cross the Loire. I’m almost in Nantes today so no winder it’s getting hot.

If none of this makes sense it is because blogging on an iPhone is a cuddly business. Thank you for all your good wishes. Onwards, southwards! 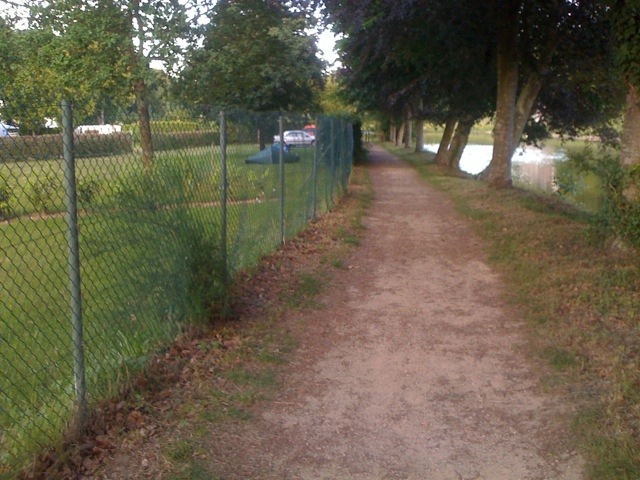 Days 1 and 2 are done and I’m 140 miles closer to Santander than when I stepped off the ferry with abot 80 other cyclists yesterday. I’ve no idea where they went  but they were following me for a while. Big mistake!

Strangely, the further south I go, the warmer it gets. The thermals, leg and arm warmers gradually came off as the day went on. I had a very interesting zebra stripe sun tan on the top of my head last night, so I’ve even got the ambre solaire out today.

Yesterday was a big day that started unnaturally early when the ferry docked at 07:00 and ended 80 miles later in Guemene sur scorf. Today was 60 miles but much hillier and I’m in a wonderful municipal campsite beside the Brest-Nantes canal in Malestroit.

The gear is holding up well with only one puncture so far. I bought a new inner tube in a supermarket by the fruit counter. Warm in my little tent and managing to find veggie food to sustain me.

Off to Nort sur Edre tomorrow

Left bang on time and am drinking beer on the ferry. Bloody cold on the road!

I’m off. The weather is foul, it has been raining on and off all day and the wind is blowing in my face. But looking on the bright side, it can only get better.

Photos are going to be a bit of a hotch-potch affair as my camera has been kidnapped by LUTON CAMERA REPAIRS!! If anyone can think of a brilliant way of getting it to me in France from them in Luton then I’m all ears.

Thanks to all the lovely people who turned out to wish me bon voyage last night. Your kind words will make the wheels turn easier and the miles seem shorter. Very slight headache this morning.

Just in case you lose me….

My route is not completely fixed but, just in case you have a bit of an interest in where I am at any given point, here is a link to the map that is in my SatNav. I’ve tweaked it a bit in Northern Spain, and there is one section to the southwest of Bordeaux where I am definitely not going along the motorway.

In one week I’m off! Just spent the last couple of days having a bit of a panic as the fortnight I thought I had left to get ready suddenly became one week. Much hasty running around making vital last minute purchases of Ambre Solaire, toothpaste and deodorant.

The only thing still missing is my camera. On my trip to Cornwall I hit a big potholoe (all Welly Wheelers will know the one at the end of Pothole Lane) and my barbag bounced off and scattered the contents across the road. Unfortunately, my camera was in there and suffered serious injuries. I found a very helpful company in Luton to repair it and am banking on them getting it back to me this week.

The Prostate Cancer Charity has been great. They even sent me a cycling Jersey that will be worn the whole way if possible – I’ll put up a photo when the camera arrives.

So, what’s left to do? God knows. I’m walking around with a To Do list in my hand that is getting longer, not shorter.  The last thing I’ve had time to do is go cycling, but I’m going to make up for that at the weekend. Happy days.

Don’t forget the launch party on Wednesday. I’ll be running from the Time Trial to the bar, so mine is a Carlsberg from the shelf – the warmer the better (eew!)

OK people, this is an advance notice of a sending off party on Wednesday 25th May. Nothing like setting off with a hangover. We are gathering at Rule 7 from 8.00p.m. as a bit of a launch party – if you’ve invested sponsorship in this event, you might like to be sure I’m actually leaving. The bar is in Fore Street, Wellington, and I hope you will be able to come along to wish ‘Bon Voyage’ – lycra is optional.